Meretz UK is holding our annual Hanukkah party on Sunday, 9 December, starting 7 pm. And we are delighted to have as our special guest Sana Knaneh, who will be speaking on The Need for Light in Israeli Politics.

Sana is a Palestinian citizen of Israel who has recently been appointed the Development Director of UK Friends of the Bereaved Families Forum (FBFF), in addition to being a researcher for Mitvim – The Israeli Institute for Regional Foreign Policies.

A fully qualified pharmacist, she also holds an MA in International Relations from the Hebrew University of Jerusalem and an Executive MSc in International Strategy and Diplomacy from the LSE. Sana is a certified Seeds of Peace dialogue-group and conflict resolution facilitator, and has facilitated various groups from a number of different organisations. 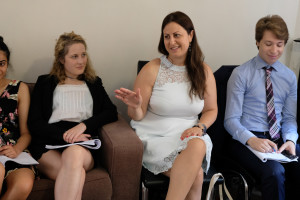 Sana speaking to students at the School of Ethics and Global Government, Washington DC

Now based in London, Sana most recently spoke at a screening of a film about FBFF courtesy of the LSE Students Union Voice of Israel-Palestine. In June she and Sivan Atzmon spoke about their hopes for reconciliation at a Nottingham University event supported by the Jewish Board of Deputies and Methodist Church Conference, called Invest In Peace.

In August Sana participated in the Union of Jewish Students conference, Bridges Not Boycotts. In November she discussed with Rabbi Jonathan Wittenberg issues of identity and discrimination, particularly regarding Israel’s Palestinian citizens, at the Masorti Israel@70 conference. And later that same month she addressed the Women Wage Peace conference in Israel.