Vivi Lachs will be speaking at Meretz UK on Sunday, 22 July, about

Whitechapel Noise: Sex, politics and religion on the streets of London’s East End 1884-1914

Vivi Lachs is a social and cultural historian, Yiddishist, and associate research fellow at Birkbeck, University of London. She is the author of Making Multimedia in the Classroom and has written articles on education and Jewish history. She performs and composes music to London Yiddish lyrics. 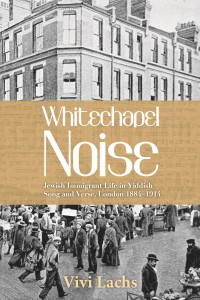 Her talk explores the abundance of Yiddish kupletn (couplets) written by songwriters and poets in pre-First World War London. Penned by the famous and the unknown, they tell tales of an immigrant culture in flux.

What others have said about the book…