The Perils of Annexation

Please join us on Thursday, June 25, for a Zoom conversation between Ambassador Dr. Husam Zomlot, Head of the Palestinian Mission to the UK, and Ambassador (ret.) Ilan Baruch, chair of the pro-two-state Policy Working Group, on the dangers posed by unilateral Israeli annexation of West Bank territory. Ms. Shaqued Morag, the executive director of Shalom Achshav (Peace Now in Israel), will moderate the conversation, which will be followed by a Q&A with the Zoom audience.

Our panel will discuss the implications of unilateral annexation – the anticipated political fallout in each nation and around the region, the expected developments on the ground, the question of international reaction and international law – and, just as importantly, how this dangerous move can still be prevented.

Dr. Zomlot holds a PhD in economics from the University of London, was a professor of Strategy and Public Policy at Birzeit University, where he co-founded and chaired Birzeit’s School of Government, and held a number of teaching and research positions at Harvard University and the University of London. His professional experiences include working as an economist at the United Nations and an Economic Researcher with the London School of Economics and the Palestine Policy Research Institute.
Dr. Zomlot is married and has three children.

Ambassador (ret.) Ilan Baruch was until recently the policy advisor to the Chairperson of Meretz. In March 2011, Baruch resigned from Israel’s Ministry of Foreign Affairs on grounds of principle, after a 36-year diplomatic career. It included overseas postings in Asia, Europe, and Africa and a number of HQ postings: Founder/Director of the Palestinian Autonomy Department; Head – Coordination of the Multilateral Peace Process; and Head – Middle East Division for Economic Cooperation.

Baruch was a team member of the Israeli delegation to the Oslo Peace Interim Accords negotiations, and participated in various negotiations with the Palestinian Authority, Jordan, and Egypt on economic agreements.

Baruch’s last posting overseas was Ambassador of Israel to South Africa, as well as Namibia, Botswana, and Zimbabwe. Since his early retirement, Baruch has been devoting his time and experience to projects in public diplomacy and occasionally contributes columns of political advocacy in different media outlets in Israel and abroad.

Baruch is currently the Chairperson of the Policy Working Group, a team of activists devoted to promoting a Middle East Peace Process based on the two-state paradigm. Baruch is also an editorial board member of the Palestine-Israel Journal and co-founder of a new cultural centre start-up, the Palestine House in Tel Aviv.

Shaqued Morag has served as the executive director of Shalom Achshav (Peace Now in Israel) for the past two years. During this time she has presided over Peace Now’s campaigns on the Nation-State Law, on bringing accountability to bodies behind settlement outposts, on marking the 40th Anniversary of the Israel-Egypt Peace Treaty, and, most recently, is leading the fight to prevent annexation.

Before joining Shalom Achshav, she served in senior positions in the Meretz party, including as the party’s interim Secretary-General and as an adviser to MK Michal Rozin. Previously, she served as the community coordinator in Jerusalem for Mahapach-Taghir, a grassroots Israeli Jewish-Palestinian organization for social change, where she is now a member of the Executive Committee. 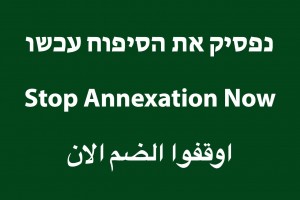